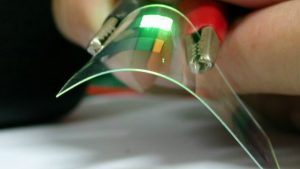 An international team of researchers developed energy-storing devices that could be used to make transparent, flexible electronics. They used a new technique to fabricate supercapacitors made of carbon nanotube films. Like all supercapacitors, they can store more charge in a small amount of volume or mass, they have fast charge and discharge rates, and are very stable. But the new supercapacitors are also flexible, 92 percent transparent, and so stable that they do not degrade after 10,000 charging cycles.

The researchers—Petri Kanninen et al., from institutions in Finland, Vietnam, and Russia—described their electrochemical double-layer capacitor in a paper that published in Nanotechnology in April 2016. Other groups have also attempted to use carbon nanotubes for similar applications, but using them for supercapacitors requires the nanotubes to be prepared as thin films, which have drawbacks including imperfect nanotubes, reduced conductivity, additional performance limitations. Kanninen and colleagues solved this problem by fabricating the films using a one-step aerosol synthesis method. Compared to the next best flexible thin films to date, the new version exhibited the highest transparency, the highest mass specific capacitance, and one of the highest area specific capacitances.

These supercapacitors could be used to store energy for a wide variety of electronics, with the added bonus of being flexible and transparent. Potential applications include self-powered smart watches or other wearables, smart windows, self-powered flexible displays, and electronic skin. In the future, the researchers plan to further improve the performance, durability, and they will attempt to make the supercapacitors stretchable. Coauthor Albert Nasibulin told Phys.org, “We are currently working on a new type of stretchable and transparent single-walled carbon nanotube supercapacitor. We are confident that one can create prototypes based on carbon nanotubes that might withstand 100% elongation with no performance degradation.”