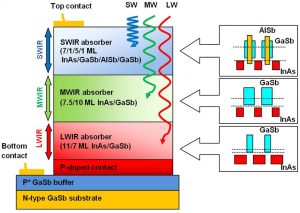 A figure from the research paper in Scientific Reports. The colored rectangles in the insets represent the forbidden gap of component materials. Dotted lines represent the effective band gaps of superlattices.

Infrared color televisions could now be possible because of a breakthrough by engineers at Northwestern University. Although infrared waves exist in short, medium, and long lengths, most detection devices can’t capture all three at once. The Northwestern team has now developed a three-color photodetector that could make several new applications for infrared detection and imaging possible. Manijeh Razeghi, who led the project, said, “A device capable of detecting different infrared wavebands is highly desirable in the next generation infrared imaging systems.”

The researchers created a new design for three-color photodiodes without using additional terminal contacts. In a paper that published in Scientific Reports, Rezaghi and her colleagues wrote:

As the applied bias voltage varies, the photodiodes exhibit sequentially the behavior of three different colors, corresponding to the bandgap of three absorbers Well defined cut-offs and high quantum efficiency in each channel are achieved.