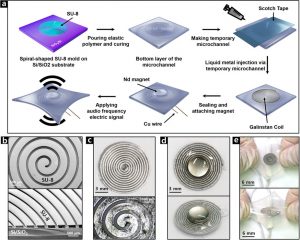 Korean researchers developed a flexible microphone and loudspeaker. The device can record the human voice and other noises and play the sounds back, even after it has been stretched to half its length 2,000 times. This technology could be applied to wearable devices such as hearing aids, heart monitors, and implantable medical devices in the future.

The team behind the innovation is a group of experts in acoustics and electronic engineering from Korea University and the Korea Institute of Science and Technology. Their work published in Scientific Reports on July 16.Previous development of flexible electronics has been limited because scientists have not been able to develop audio components that could remain mechanically stable after being stretched.

The Korean researchers tried several methods and designs before finding a solution. The new device operates with the same basic principles of earphones and microphones, using the interaction between a magnet and a current flowing coil. The breakthrough came when the researchers replaced the rigid metal coils that are typically used with an elastic liquid metal coil. The new flexible coil is made of a thin film of flexible silicone that has been injected with Galinstan, a highly conductive liquid metal alloy of gallium, indium and tin. The result: a microphone and loudspeaker that says mechanically stable, even when it is stretched repeatedly.

Now that they have discovered that Galinstan is a good material for flexible electronics, the researchers will work on making their design ready for commercialization by making it thinner and improving the sound quality. They are considering several solutions, such as using a stronger magnet, making the silicone rubber thinner, increasing the number of turns in the coil, and replacing the solid magnet with a more flexible material.