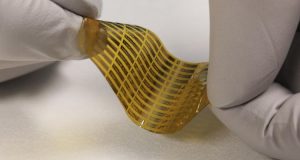 A new nanodevice has been created by EPFL researchers that is capable of reaching speeds far surpassing other transistors. The new device can operate over ten times faster than even the fastest of modern transistors. As for the transistors that are found on your computer? This nanodevice runs roughly 100 times faster. It is believed that this new technology could be used in both communications and the medical field.

The nanodevice operates thanks to its ability to generate high-power terahertz waves. Although these waves can prove extremely useful, they have long proven difficult for scientists to produce. These waves fall on the electromagnetic spectrum between microwave and infrared radiation. Their frequencies can range from 100 billion to 30 trillion cycles per second.

Terahertz waves have the added advantage of being a form of non-ionizing radiation. This means that they can be used in a variety of different applications — including the medical field, and to scan passengers at airports — without causing harm to people.

The nanodevice is inexpensive, compact, and fully electric. It is capable of generating high-intensity waves by creating a powerful jolt of voltage. The jolt can spike from lower than ten volts all the way up to 100 volts in a mere picosecond. Since the energy can be generated continuously, the device can emit nearly 50 million singles per second. And if the device is hooked up to antennas, it can be used to create high-power terahertz waves, as well as radiate them.

The device is constructed out of two metal plates. These plates are placed roughly 20 nanometers apart. As voltage is applied to the device, electrons merge together along one of the plates to make a nanoplasma. After the voltage has achieved the required threshold, the second plate is bombarded with electrons. By switching rapidly between the two plates, a high-intensity pulse is created. The pulse then produces high-frequency waves. This is a radical change from conventional electronics, which can only switch at a maximum of one volt per picosecond. The lack of speed and power has prevented researchers from producing terahertz waves — until now.

Engineers are continuing to push the limits of their new device to uncover further ways it could prove useful in a variety of applications. These include medical imaging for cancer patients, as well as full-body security scans that could identify potential threats without exposing people to dangerous radiation.