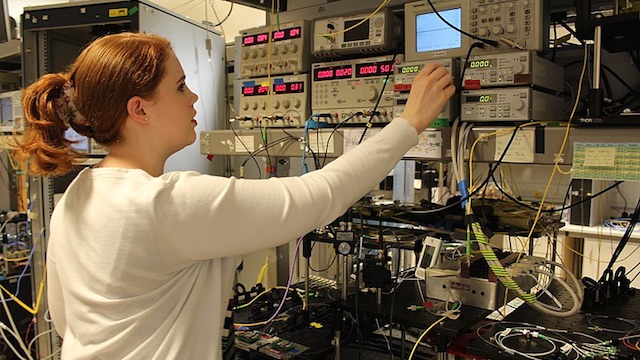 Researchers at IBM have designed a new type of optical receiver. This receiver is capable of achieving an aggregate bandwidth of 160 Gb/s thanks to four optical fibers. This technology could be enormously useful as our need for datacenters and bandwidth-heavy technology continues to increase at a rapid rate. The novel optical receiver promises to be energy-efficient, providing users with multi-channel optical links and fast rates of data transfer.

The idea is based on complementary metal-oxide-semiconductor technology. This technology is a method for manufacturing chips in a way that is low-cost and high-volume, and is used for the production of most processors and chips today. Under the EU-funded project ADDAPT, IBM researchers in Zurich have successfully demonstrated the effectiveness of their new optical receiver.

The device features a rapid power-on/off feature. Scientists believe this will help to enhance link utilization. It will also significantly reduce energy consumption on a chip or if used within an optical interconnect system. While the majority of commercial optical transceivers remain powered on whether or not there is any transmission activity, the new model operates a bit differently. Power is only used when data packets are transmitted through the optical link. The device comes packaged with an 850-nanometer photodiode array and targets low-cost VCSEL-based optical links for datacenter interconnects.

“This is the first optical an receiver that combines high-speed data transmission rate and rapid power-on and off functionality while being extremely low lower in the ‘power-on’ state (about 88 miliwatts).”

Alessandro Cevrero, the primary author of the paper and a scientist of IBM Research Lab, Switzerland

The researchers extensively tested every aspect of their new design. Power on/off tests were performed wherein the device was used to generate an optical signal implementing the proposed link protocol. The results on this experimental data revealed that a 10% link utilization corresponds to a power saving percentage of 85 on the receiver.

Scientists also determined that by improving power efficiency of optical links, they were able to create noticeably faster and better performing computer systems. This is due to the fact that it is possible to force higher bandwidth into the same thermal budget of the package. Additionally, by reducing energy consumption scientists are also able to reduce the emissions of carbon dioxide from the optical network. Researchers believe this could ultimately result in greener, environmentally friendly optical communication systems.