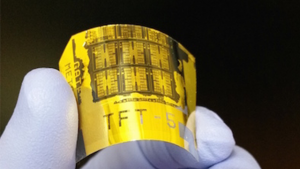 Electrical engineers have created the fastest, most responsive flexible silicon photo transistor ever made. It is more sensitive and boasts better response time than any similar device. The new phototransistor could improve the performance of any product that relies on electronic light sensors. Just a few examples are: digital cameras, night-vision goggles, smoke detectors, surveillance systems, and satellites.

The team behind this innovation is a group of electrical engineers from the University of Wisconsin-Madison. They are now working on patenting their technology, which was inspired by our eyes. Phototransistors and eyes both work by sensing and collecting light, then converting it into an electrical charge proportional to its intensity and wavelength. Although phototransistors are typically flat and rigid, this new one—just like mammals’ eyes—is curved and flexible. “We actually can make the curve any shape we like to fit the optical system,” said researcher Zhenqiang “Jack” Ma. “Currently there’s no easy way to do that.”

The researchers used an innovative “flip-transfer” fabrication method, in which their final step is to flip the finished phototransistor onto a plastic substrate so that the reflective metal layer is on the bottom. “In this structure—unlike other photodetectors—light absorption in an ultrathin silicon layer can be much more efficient because light is not blocked by any metal layers or other materials,” Ma says. They also improved light absorption even more by placing electrodes under the phototransistor’s ultrathin silicon layer. The research is described in detail in the journal Advanced Optical Materials.