Radar and Sensors Aid with Medical Care for the Elderly

Researchers at the University of Missouri (MU) are developing technology that can help elderly people remain in their homes longer by providing long-term medical monitoring. Radars and sensors placed throughout the home can identify subtle physical and behavioral changes that can alert patients and caregivers to early signs of illness. 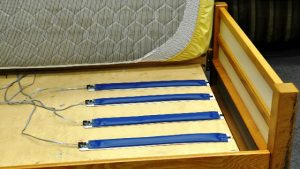 The MU researchers have spent more than a decade developing technology for their “Age in Place” project. Two papers describing the studies were recently accepted by the the Journal of Ambient Intelligence and Smart Environments. Volunteers at a nearby apartment complex have been testing motion-capture technology and now radar and sensors. While having a home filled with sensors sounds a bit invasive, the monitoring systems stay out of the way and give seniors the freedom of hands-off medical care.

In the experiment, radar devices were concealed in a wooden box and placed in residents’ living rooms. The radar monitored walking speed, which is a strong indicator of health. “Now we have data that definitely shows how declines in walking speed can determine the risk for falls,” said Dominic Ho, an MU engineer and co-author of a paper about the walking speed study.

Additionally, the team also developed a bed sensor that continuously monitored heart rate, respiration rate and overall cardiac activity. The sensors are made using a hydraulic transducer, which is a flexible tube of water that can measure blood flow. They collect data on sleeping patterns, which, just like walking speed, give clues about early signs of illness. “In-home sensors have the ability to capture early signs of health changes before older adults recognize problems themselves,” said Marjorie Skubic, a professor of electrical and computer engineering at MU who led the two studies.