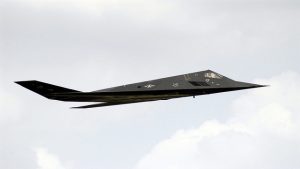 New technology can even catch stealth aircraft that has been designed to be nearly invisible to radar detection. Previously, military aircraft could be hidden from enemies by using a thin coat of metamaterials that reduce the reflection of radar emissions. While current microwave absorbers for stealth technology are effective against radars in the super high frequency range, they are no match for new technology that uses longer wavelength radar to search for aircraft in the ultra-high frequency (UHF) range. To solve this, researchers at the Huazhong University of Science and Technology in China have developed a new material that can be tuned to absorb microwaves at a range of frequencies.

The material, called an “active frequency selecting surface” (AFSS), is made of a semiconductor capacitor often used in electronic tuners called a varactor diode, as well asPIN diodes, which are semiconductors that act as variable resistors to electromagnetic radiation at RF and microwave frequencies. The researchers found that their ultra-thin material could to tune itself to absorb radio frequencies ranging from 0.7 to 1.9GHz, therefore reducing reflectivity and improving the radar cross-section (a measurement of how detectable an object is by radar). In other words, an aircraft covered in this new material could even hide from the most modern radar systems.

In a paper published in the Journal of Applied Physics, the researchers concluded, “As radar detection equipment continues to improve, our thin absorbers with broad bandwidth and working in the UHF band will be widely useful.”