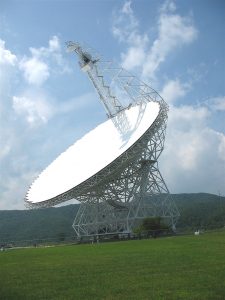 Back in the 1930s when Bell Labs was first installing phone systems across the country, an electrical engineer identified the Milky Way galaxy as a source of static on the lines. To study this phenomena the U.S. government built a 495-foot radio telescope named the Robert C. Byrd telescope at the National Radio Astronomy Observatory in Green Bank, West Virginia. It is the largest fully steerable telescope in the world.

Today scientists use the telescope—which is commonly called the Green Bank Telescope (GBT)—to track patterns of electromagnetic radiation from stars and planets. The telescope has a wide frequency range and is extremely sensitive, with the unique benefit of picking up sounds from places where light can’t reach, such as Mercury’s molten core. However, the sensitivity poses challenges, too: since it picks up everything, scientists find it extremely difficult to hear the particular celestial bodies they want to observe. (Try listening to one voice across the room in a chatty crowd.)

To cut down on electromagnetic noise, the telescope is located in a National Radio Quiet Zone that is slightly bigger than the state of Maryland. Electromagnetic silence is enforced in this federally-mandated Quiet Zone, with violations punishable by law. In order to prevent interfering radiation, the government bans cell phones, Wi-Fi, and Bluetooth devices. The ban even extends to gasoline-powered vehicles, because the ignition sparks cause interference with the telescope. The Quiet Zone is one of the last places in America with minimal electromagnetic radiation. It is like a natural anechoic chamber—instead of absorbent walls, pine trees and the Allegheny Mountains buffer outside frequencies.

The GBT is currently at risk for losing public funding. In 2012 a committee suggested that the National Science Foundation (NSF) should divest the telescope by 2017 in order to free up resources for new observatories. The facility is currently searching for new partners.