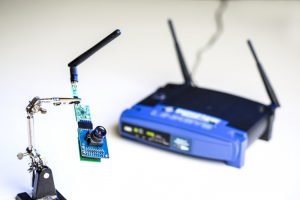 A team of computer science and electrical engineers have developed a way to power devices using Wi-Fi. The technique does not degrade Wi-Fi signals, so routers can send energy without slowing down data transfer speeds. This new approach could help solve the ongoing challenge of how to power the many tiny sensors that are now embedded into everyday objects for the Internet of Things. The University of Washington (UW) researchers call their new technology PoWi-Fi, for power over Wi-Fi. They successfully used ambient signals from a Wi-Fi router to power a simple temperature sensor, a camera, and a charger for a fitness activity tracking bracelet.

To make it work, the researchers programmed routers to send out a constant signal that is captured and then converted into DC power. The researchers took advantage of the fact that Wi-Fi radio signals are a form of energy that a simple antenna can pick up. Previously, Wi-Fi receivers have been designed to only gather information, but the UW team made a few simple changes so that devices could also harvest energy at the same time. They connected an antenna to a sensor to receive the power, but then they faced a challenge: Wi-Fi signals are only sent in intermittent bursts. To make a continuous source of power, the researchers programmed a router to broadcast noise on adjacent Wi-Fi channels to fill in the blanks during the previously silent periods when information is not being sent.

Using this method, researchers were able to charge a super capacitor connected to a small camera, located 17 feet from the router. The super capacitor collected enough energy over Wi-Fi for the low-resolution camera to take a picture every 35 minutes. They were also able to charge a Jawbone fitness tracker to 41 percent of its battery power in 2.5 hours. Although this might not sound like a lot of power, the UW team believes the PoWiFi system can be improved to make it more efficient and robust in the future.

The research was demonstrated earlier this year, and the final paper will be presented in December at the Association for Computing Machinery’s CoNEXT 2015 conference in Heidelberg, Germany, on emerging networking experiments and technologies.