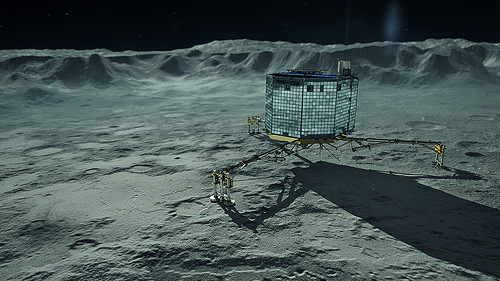 After hibernating in a frozen rocky ditch for seven months, comet lander Philae has woken up and contacted Earth. The European Space Agency says the lander sent a “weak but solid” radio signal lasting 85 seconds on June 13. Last November, Philae became the first spacecraft to land on a comet, when it was delivered to Comet 67P by its mothership Rosetta. The journey took ten years, and when it touched down on 67P, Philae bounced a half a mile and landed in a dark ditch. This shady location obscured the robot’s solar panels from the Sun. Under these circumstances, it worked for 60 hours until the battery ran out, just as engineers expected.

The comet has since moved closer to the Sun, exposed the solar panels to enough light to recharge the battery. Although it is still millions of miles away from the Sun, Philae is generating electricity and has 24 watts available. “We can already tell that all lander subsystems are working nominally, with no apparent degradation after more than half a year hiding out on the comet’s frozen surface,” said Stephan Ulamec, Philae Lander Project Manager.

Scientists will now have the chance to pore over 8,000 data packets that the lander has already collected. Philae will also gather new information as it rides along with the comet. Philae will provide an extraordinary view of the comet, which is expected to spew gas and dust as it melts when it approaches the Sun. If it survives, the lander could also drill the comet’s surface and analyze the material to determine if it contains large amounts of water and carbon, the building blocks of life. Experts eagerly await the data, which could reveal whether comets were the source of life on Earth.