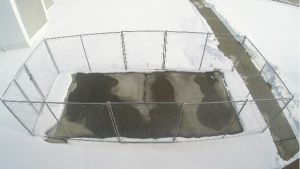 When it snows in Roca, Nebraska, one special bridge never gets slippery. This section of the road is electric, so ice and snow quickly melt away. The secret is conductive concrete, which is a patented blend of steel shavings, carbon particles, and standard concrete mix. When the concrete is connected to a power source, it conducts just the right amount of electricity to melt ice and snow while still remaining safe to touch. The bridge successfully de-iced itself during a five-year trial run, and now the researchers who developed the technology are looking to use it in more roads, as well as in some other unexpected ways.

The conductive concrete was developed by a team of researchers at the University of Nebraska-Lincoln, led by an engineer named Chris Tuan. In addition to the convenience and safety of having snow-free roads, conductive concrete eliminates the need for the salt and de-icing chemicals that highway crews usually apply to slippery roadways. Over time, these chemical treatments corrode cars and roads and contaminate groundwater.

Tuan says that the concrete is too expensive to be used to pave an entire road, but it could be used in strategic locations, such as busy intersections or bridges, which freeze first because they are exposed to the elements from all directions. Adding electrically conductive components to standard concrete mix does make it expensive, but it could be worth the investment in snowy regions since it would help cut back on road maintenance in the long run. We’d also be willing to bet that some people would be willing to pay for the perk of never having to shovel their driveways again. Tuan even uses the conductive concrete in a patio at his home.

It could also be used to help reduce weather-related flight delays. The Federal Aviation Administration (FAA) has commissioned Tuan’s research team to test the conductive concrete to see if it should be integrated into airport tarmacs—but not where you might expect it. “To my surprise, they don’t want to use it for the runways,” Tuan said. “What they need is the tarmac around the gated areas cleared, because they have so many carts to unload – luggage service, food service, trash service, fuel service – that all need to get into those areas.”

Tuan has aso shown that his concrete mixture can be used for shielding against electromagnetic waves. His team replaced the limestone and sand that is typically used in concrete with a mineral called magnetite and used the (now patented) mixture to build a small structure in their lab. “We invite parties that are interested in the technology to go in there and try to use their cell phones,” said Tuan. “And they always receive a no-service message.”