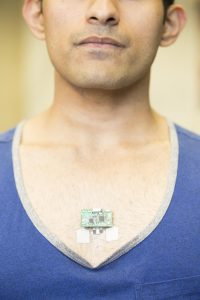 The patch can be worn on the chest, near the base of the sternum, and communicates wirelessly with a smartphone, smart watch or laptop.

A team of nanoengineers and electrical engineers at the University of California San Diego have created the first flexible wearable device that can measure both biochemical and electric signals in the human body. One small patch simultaneously records electrocardiogram (EKG) heart signals and tracks levels of lactate, a biochemical that is a marker of physical effort. Most wearable fitness trackers only measure one signal, such as steps or heart rate, just a few of them measure chemical signals, and until now, none could measure both.

It was a challenge to put two sensors together on circuit board that is small enough to be comfortably worn. The engineers tested different configurations and found the ideal distance between the sensors in order to enable strong signals while avoiding interference. They also had to consider sweat, which is necessary for the lactate sensor work, but disrupts EKG readings because it is conductive.  To solve this, they added a printed layer of water-repelling silicone rubber to isolate sweat from the EKG, while still allowing it to touch the lactate sensor. Both sensors were then connected to a circuit board that was equipped with a microcontroller and a Bluetooth Low Energy chip, which allows the device to wirelessly transmit data to a user’s computer, smartphone, or smart watch. 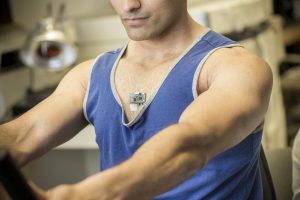 Study co-author Amay Bandodkar wears the ChemPhys patch while using an exercise bike in a lab at the Center for Wearable Sensors.

The patch could be used in medical settings, such as for tracking cardiac patients. It is also especially promising for sports medicine, and the researchers are already fielding inquiries from Olympic athletes who are interested in the technology. As they continue to work on the device, the researchers hope to improve the way the patch and the board are connected and add sensors for other chemical markers and vital signs. They describe their ChemPhys patch in the May 23 issue of Nature Communications.