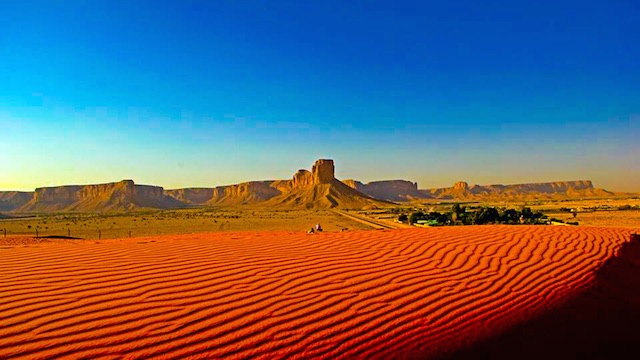 Saudi Arabia is poised to be the first place to test a brand new type of solar technology. Known as Particle Heating Receiver (PHR), this technology is twice as efficient as current solar power. It promises to cut costs on solar thermal energy while increasing the overall output. And now it’s undergoing commercial trials for the very first time.

First conceptualized at Sandia National Laboratories, PHR technology is in the process of being researched across the globe. It combines cutting edge technology with the ability to convert the sun’s heat into usable power. PHR promises to revolutionize Concentrated Solar Power (CSP). CSP that has thermal energy storage would allow solar generation at any time, regardless of whether or not the sun is shining.

Commercialization is a major step forward in this research, and one that relies on a very unexpected variable. The red sand available throughout Saudi Arabia has proven essential to this process. Scientists rely on the sand, which flows through a cavity receiver inside tower plants. Another technique involves using different particles in free fall, or those that are in an enclosed receiver.

With all these resources at its disposal, Saudi Arabia is going to be the first country to commercialize particle receiver technology — a major scientific triumph. Funding will be supplied by the Saudi Electric Company. The company will also be assisting in researching the properties and uses of the red sand approach to heat absorption. Planning phases of a commercial trial are scheduled for later this year.

Sand has long been considered a potential energy resource, and has always been a source of interest for use in particle receiver technology. It tends to lose less than 1% of its stored energy on a daily basis, while simultaneously being able to achieve temperatures that are nearly twice as high.

Particle receivers show a lot of promise for energy and power. Towers that have thermal energy storage properties allow for solar generation at any time. This will prove a key factor as we move forward in exploring new sources of energy. Particle receiver technology could also dramatically cut energy costs, as it has the potential to nearly double current power tower temperatures.

There is a lot of work to be done in this field, but the future looks bright for particle receiver technology — and Saudi Arabia is at the forefront of this research.