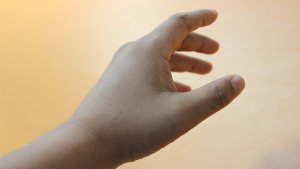 In the future, people with paralyzed limbs could have full use of their bodies restored with an electronic implant. A consortium of scientists called BrainGate are working toward achieving this goal by developing a wireless system that can transmit brain signals through the air to electronics sewn into the limbs of paralyzed people. While there are still many obstacles to overcome before making this vision a reality, scientists at Case Western Reserve University have just announced a big step in the right direction.

They used an electronic brain implant to enable a man to use his mind to move his arm and hand, despite a spinal that has prevented him from moving his arms at all. According to the researchers, this is the first time that signals collected in the brain have been conveyed directly to electrodes placed inside someone’s arm to restore movement.

To achieve this seemingly impossible task, surgeons implanted two bunches electrodes into the man’s cortex, the part of the brain where movements are planned. Each electrode—called a Utah array—has 96 silicon needles that record the electrical impulses of the brain’s neurons. Wires connected each electrode to computers that interpret the signals. On the receiving end, doctors inserted fine wires into the man’s arm and hand. With this setup, the electrical impulses sent to the electrodes activate the nerves and make the muscles contract, in a technique that is known in the medical community as Functional Electrical Stimulation (FES).

With this technique, the volunteer could use his brain to move his arm and hand for the first time in many years. However, his movements were rough, since his muscles are weak and atrophied from being out of use for so long. While he could control a computer simulation of his arm with excellent accuracy, designing a system to work with a human body is more complicated than dealing with a virtual arm. Still, John Donoghue, a leader of BrainGate, told MIT Technology review, “The fact that they got a person to control their own body, to stimulate muscles in a specific way to make them move, and do it from a small patch of brain, is incredible.”