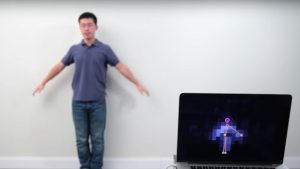 Scientists from Carnegie Mellon University in conjunction with Disney Research have discovered a way to transform traditional paint. Using an array of new technologies, researchers have taken regular walls and turned them into smart infrastructures capable of sensing human touch, detecting gestures, and connecting to other devices. Perhaps most impressive, this incredible technology comes in at roughly $20 per square meter — a surprisingly low price for such advanced work.

“Walls are usually the largest surface area in a room, yet we don’t make much use of them other than to separate spaces, and perhaps hold up pictures and shelves. As the internet of things and ubiquitous computing become reality, it is tempting to think that walls can become active parts of our living and work environments.”

Researchers believe this technology could help integrate walls into the Internet of Things (IoT). With sensors, walls could be used to move controls like light switches anywhere a user might desire. Video games, televisions, and other devices could be controlled with a simple gesture. Best of all, this technology could learn as it progresses; it could turn devices on and off as you enter a room, monitoring activity and predicting your creature comforts and desires.

Scientists used conductive paint to create electrodes across the surface of a wall. This allowed the wall to work as a touchpad that interacted with users. But that’s not all; the wall served up double duty as an electromagnetic sensor, capable of detecting and tracking appliances and other electrical devices. To keep down costs, these smart walls rely on paints that are water-based and contain nickel.

Ease of use was another important factor for researchers. No special skills or tools are required to apply this paint. Painter’s tape was utilized to create a cross-hatched pattern on the wall in the shape of a diamond grid. Testing revealed that this electrode pattern would prove most effective. Two coats of paint were applied with a simple roller; the tape was removed, and the necessary electrodes were connected. A top coat of standard latex paint finished off their work by hiding the electrodes and adding additional durability to the design.

Once done, the walls have two modes: capacity sensing, and electromagnetic sensing. The next move for scientists will be to make a more energy-friendly model; the current smart wall uses as much power as a standard flatscreen.

Check out the video below to see this incredible technology in action.