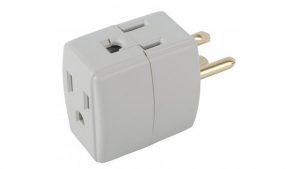 Ningbo Litesun Electric has issued a recall on their Outlet Converters. The outlet converters front outlet prongs are not configured correctly, resulting in reverse polarity when plugs inserted, posing shock and fire hazards.

This recall involves commercial electric 15-amp triplex outlet converters, also known as taps, with model number LA-05 and UPC 818897010121. The white plastic converters convert a single electrical outlet into three outlets with an outlet plug on the left, front and right side of the tap. The outlet taps measure 1.7 inches tall by 1.3 inches wide by 1.69 inches deep. On the front facing outlet, neutral and line (power socket) sizes are reversed. The model number is printed on the mold on the side that the prongs are located and the UPC number is printed on a sticker on the top of the converter along with the UL listing.

The Outlet Converters were sold exclusively at Home Depot stores nationwide and online at www.HomeDepot.com from February 2017 through July 2017 for about $5.

There has been one report of a consumer who was shocked while using an outlet converter.