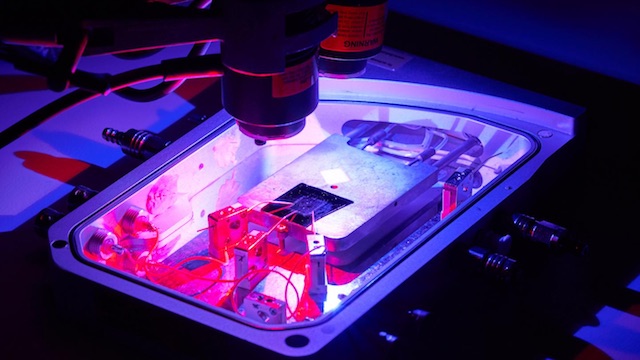 Researchers from RMIT University have created a new type of electronic chip that uses light to mimic the ways in which the human brain stores data. Using optogenetics, which is an emerging tool in the cutting-edge field of biotechnology, scientists were able to utilize light to manipulate neurons, turning them off and on at will.

The chip is made up of an extremely thin material. This material alters its electrical resistance based on its exposure to different wavelengths of light. Because of this unique reaction, the material can imitate the method in which neurons in the human brain store and delete information.

The chip uses light to generate a photocurrent. By changing the color of the light, scientists can make the current positive or negative depending on their needs. The polarity shift of the photocurrent works similarly to the binding and breaking of neural connections. As scientists study this technology, they can learn about the mechanism that connects neurons — which causes the creation of new memories — and the one that disrupts them — which causes the act of forgetting.

To create this unique chip, scientists took advantage of a material known as black phosphorous. This material is inherently defective when found in nature — but in this case, the scientists were able to harness these defects found in this material and turn it into something useful.

“Our optogenetically-inspired chip imitates the fundamental biology of nature’s best computer – the human brain. Being able to store, delete and process information is critical for computing, and the brain does this extremely efficiently. We’re able to simulate the brain’s neural approach simply by shining different colors onto our chip. This technology takes us further on the path towards fast, efficient and secure light-based computing. It also brings us an important step closer to the realization of a bionic brain – a brain-on-a-chip that can learn from its environment just like humans do.”

Besides having significant potential when it comes to the realm of artificial intelligence, researchers are hopeful that this new technology could have medical applications as well. By observing this device and how it stores and deletes information, scientists could develop a better understanding of how the human brain functions. This could prove significant, particularly in disorders that interfere with the neural connections in the brain, such as dementia and Alzheimer’s disease.