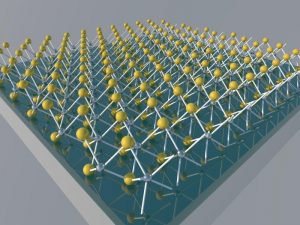 An optical nanocavity made, from top to bottom, of molybdenum disulfide (MoS2), aluminum oxide and aluminum. Credit: The University at Buffalo.

When engineers are faced with the task of designing thin, flexible electronics, there is a natural conundrum: conventional materials are too thick, but ultrathin semiconductors don’t absorb light as well as bulk semiconductors. A team of electrical engineering researchers have come up with a potential solution: they placed a 2D semiconductor on top of a mirrored structure that improves the material’s absorption of light.

Researchers from Penn State and The University at Buffalo used a 2D semiconductor called molybdenum disulfide (MoS2). Today, MoS2 is used in lubricants and steel alloys, but it is also being investigated as a possible material for optoelectronics. It is an especially promising 2D option, because unlike graphene, its bandgap is similar to semiconductors that are commonly used in LEDs, lasers, and solar cells.

A single layer of MoS2 was placed on top of an optical nanocavity—a type of photonic structure that is used in lasers and fiber optic communication to allow beams of light to circulate in closed paths. In this case, they made an arrangement of mirrors out of aluminum oxide and aluminum. In experiments, the MoS2 nanocavity absorbed nearly 70 percent of the laser that was projected onto it.

The nanocavity we have developed has many potential applications. It could potentially be used to create more efficient and flexible solar panels, and faster photodetectors for video cameras and other devices. It may even be used to produce hydrogen fuel through water splitting more efficiently.

The researchers described their work in a paper called “MoS2 monolayers on nanocavities: enhancement in light-matter interaction,” which published in April by the journal 2D Materials.

Source: The State University of New York at Buffalo