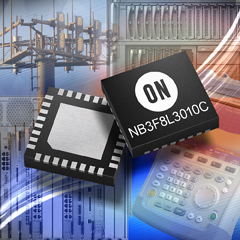 The NB3F8L3010C is a 3:1 multiplexer and a 1:10 clock/data fanout buffer targeted at networking and communications applications. Operating from a 3.3 V or 2.5 V core supply, the device has differential inputs which accept LVPECL, LVDS, host clock signal level (HCSL) and stub series terminated logic (SSTL) signals. It has a total of 10 single-ended LVCMOS outputs each capable of running at 200 megahertz (MHz). Output skew is typically kept to just 10 picoseconds (ps). Both the NB3F8L3010C and NB6L56 devices support an industrial temperature range of -40 °C to 85 °C.