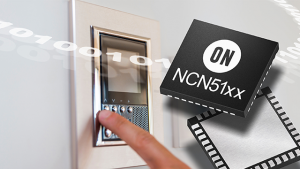 “The three new transceivers we are launching today support the world‘s most adopted standard for building automation, and enable designers to create even more cost-effective  products offering greater functionality and energy efficiency,” said Ryan Cameron, vice president of Industrial and Timing products for ON Semiconductor. “Making buildings smarter is key to preserving the environment and ensuring energy security, as buildings currently represent about 40 percent of the world’s energy consumption.”

The NCN5110, NCN5121 and NCN5130 integrate two high-efficiency DC-DC converters and a 20 V low drop-out regulator for powering external loads from the bus.  The devices are offered in a QFN-40 package and are specified for operation over the extended temperature range of -40°C to 105°C.

The NCN5121 and NCN5130 implement the complete KNX physical (PHY) and media-access (MAC) layers, while the NCN5110 is an analog-only bit transceiver to be used in combination with a microcontroller hosting the KNX MAC. The NCN5121 is pin to pin compatible with NCN5120, and offers higher efficiency and increased regulator output. As ON Semiconductor’s most advanced transceiver, the NCN5130 is capable of taking up to 40 mA from the KNX Bus, which is the highest current on the market, and gives designers greater flexibility to power devices such as an LCD panel or touchscreen, or for driving relays at higher speeds.

The new devices allow designers to specify lower external capacitance and inductance values. Compared to other transceivers on the market, this can yield savings up to 40 percent. In addition, the smaller values translate into physically smaller component sizes. In combination with the highly compact package size, this saves board space and enables designers to satisfy the tough space constraints typical of many KNX applications.