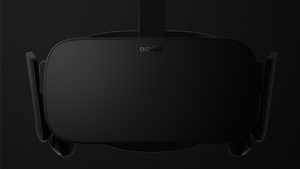 On Wednesday Oculus announced that a consumer version of their highly-anticipated Virtual Reality (VR) headset for immersive gaming  will be available in the first quarter of 2016. The Oculus Rift has been popular in maker and gamer crowds ever since it surpassed its Kickstarter goal in just 24 hours in 2012. The company was founded by Palmer Luckey, a gaming enthusiast who got started in his parents’ basement. The hype has continued to build in the last few years, with developer prototype demonstrations and especially a $2 billion Facebook acquisition.

The consumer version of Oculus Rift will be lighter, smaller, and more comfortable than previous developer kits. It comes with integrated headphones and 3D positional audio that allows players to hear noises coming from the right direction in virtual world, no matter which way they are facing in real life. It will have a tracking system so it can be used either seated or standing, although the system is not wireless. The headset has a 100 degree field of view, and ultra-low latency head tracking so that the virtual world appears seamless, even when a user moves. Immersive stereoscopic 3D rendering presents unique and parallel images for each eye, which is similar to how our eyes naturally perceive images.

Pricing has not been revealed yet, but it the system is expected to cost at least $200. Hardware, software, input details and games will be announced in the next few weeks. Although it is already very popular, Oculus will have plenty of competition. Many VR headsets are either already released or coming soon from big tech companies—Samsung, Sony, and Microsoft—as well as the popular gaming company Valve.