The octopus has no skeletal structure and yet it is capable of remarkable strength and dexterity. For years, this ability has amazed scientists and researchers. Drawing inspiration from this skeletal-free creature, a team of researchers from Harvard University has developed their own electronic-free-skeleton robot, nicknamed “Octobot”.

Octobot is the first successful demonstration of an autonomous, untethered, 3D printed, and entirely soft robot. It is powered by a chemical reaction within the bot that is controlled by an embedded microfluidic soft controller to actuate its eight arms. 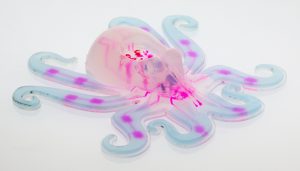 The octobot is controlled via the embedded microfluidic soft controller and powered by a chemical reaction of hydrogen peroxide.
Photo: Lori Sanders/ Harvard University

The microfluidic logic circuit, consisting of a soft analog of a simple electronic oscillator, autonomously directs the on-board fuel supply of hydrogen peroxide, which subsequently causes a catalytic decomposition (transformation of fuel to gas), allowing the arms to inflate like a balloon. Each of the functional components, including the fuel storage, power, and actuator, were created using 3D printing, molding, and soft lithography.

Combining the team members knowledge of 3D printing, mechanical engineering, and microfluidics, the team developed an integrated design and hybrid assembly approach for embedding autonomous functionality. Their work, An Integrated Design and Fabrication Strategy for Entirely Soft, Autonomous Robots, was recently published in the journal Nature.

The team developed Octobot as a proof of concept and hopes researchers, roboticists, and materials scientists will use this development as inspiration, prompting a new generation of soft robotics. In the meantime, the team will continue to enhance Octobot’s functionality to include crawling, swimming, and interacting with its environment.