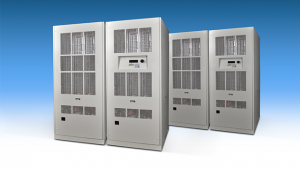 When installed in parallel with the previous California Instruments RS Series units purchased in 2013, the new system will have the capability to supply up to 2 MVA, making it not only the largest system built by AMETEK Programmable Power, but the largest known AC Grid Simulator in the world with the bandwidth and modularity of the RS system.

NREL’s advanced energy group plans to use the high power inverter for characterization and testing of electrical grid systems.  Specifically, the systems are being used at NREL’s Energy Systems Integration Facility (ESIF), the nation’s first facility that can conduct integrated megawatt-scale research and development of the components and strategies needed to safely move clean energy technologies onto the electrical grid.

Each of the two systems consists of four RS270 units, each capable of generating 270 kVA of power. Eight control chassis allow NREL engineers to remotely configure the system as a single 2 MVA, two 1MVA systems, four 540 kVA units, two 810 kVA unit and two 270 kVA unit, or eight, separate 270 kVA units. This capability will give NREL the flexibility it needs to simulate power grids to better understand how different renewable energy technologies interact with each other.

In addition, the systems have been customized to allow NREL engineers to control it in real time via external drive signals. These modifications bypass the system controller and allow the external signals to directly control the high-power source. This eliminates processing delays and allows the system to be used with NREL’s hardware-in-the-loop (HIL) simulators.

Hardware-in-the-loop simulation is not a new concept, but adding megawatt-scale power takes research to another level. In a power hardware-in-the-loop (PHIL) experiment, portions of a power system being studied are modeled in software, while other portions exist as actual hardware.