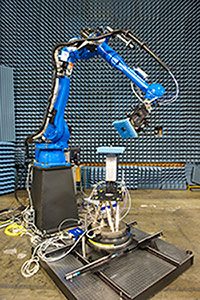 Researchers at the National Institute of Standards and Technology (NIST) have developed a robot that can quickly measure the properties of high frequency antennas. It will be used to characterize a growing number of antennas that operate above 100 GHz and are used in several emerging technologies. This new tool will help meet demand for small antennas that are used in advanced communications, weather prediction and climate monitoring, imaging systems and radar.

“We designed this system to address a need in the antenna community for high-precision and configurable scanning at short, millimeter wavelengths,” lead researcher Joshua Gordon explained in a NIST release. “Past systems haven’t been as complete as they need to be. The robot allows us to explore many ways of doing measurements. There’s a lot of configurability and an extremely high level of repeatability.”

The robot is equipped with a probe and it can twist into unusual positions to view an antenna from nearly all directions and orientations. The robot uses near-field scanning, a technique that determines an antenna’s gain (signal power transmitted or received), polarization (orientation of the electromagnetic field) and pattern (angular distribution of transmitted or received energy). NIST’s new robot quickly performs measurements of antenna alignment that previously would have required several steps and different methods.

The research is described in a paper in the IEEE Transactions on Antennas and Propagation.