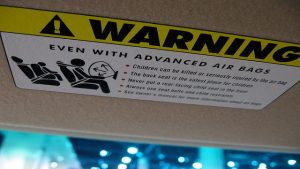 Japanese air bag manufacturer Takata has been hit with a record setting $200 million fine for violating the Motor Vehicle Safety Act. Takata’s exploding air bags have prompted an unprecedented punitive response from NHTSA. “Today, we are holding Takata responsible for its failures, and we are taking strong action to protect the traveling public,” said NHTSA Administrator Mark Rosekind.

The air bag inflators can rupture unexpectedly, expelling shrapnel into the car and creating a major safety hazard for drivers and passengers. Takata’s air bags have caused 7 deaths and nearly 100 injuries in the United States. The defect is wide reaching, forcing 12 vehicle manufacturers to recall a total of 19 million vehicles in the U.S. Transportation Secretary Anthony Foxx didn’t mince words—he released a statement condemning Takata for the way the defective air bag inflators were handled over the last 15 years.

For years, Takata has built and sold defective products, refused to acknowledge the defect, and failed to provide full information to NHTSA, its customers, or the public. The result of that delay and denial has harmed scores of consumers and caused the largest, most complex safety recall in history. Today’s actions represent aggressive use of NHTSA’s authority to clean up these problems and protect public safety.

Takata has previously refused to comply with requests for a national recall, claiming that the air bags would only explode in areas with high humidity. Then in June, after intense pressure and expensive daily fines from regulators, Takata admitted that the defect is caused by manufacturing errors and design flaws. Now, as part of NHTSA’s Consent Order, the company has also admitted that it was aware of the defect but failed to issue a timely recall. NHTSA also charges that Takata provided regulators and customers with selective, incomplete or inaccurate data.

As a result, for the first time in history, NHTSA is using its authority to accelerate recall repairs. Vehicle manufacturers must ensure they have enough replacements parts for the highest-risk inflators by March 2016, and they are required to provide final remedies for all vehicles by the end of 2019. The recently announced NHTSA orders impose a record high civil penalty of $200 million, which includes a $70 million cash fine and an additional $130 million that could become due if Takata fails to meet its commitments or if additional violations of the Safety Act are discovered. Additionally, Takata must phase out the manufacture and sale of inflators that use phase-stabilized ammonium nitrate propellant, which is believed to be a factor in the explosive ruptures.