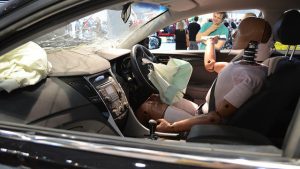 Automakers and regulators dealt with Takata’s exploding air bags throughout 2015, and this widespread problem isn’t going away anytime soon. At the end of the year, the National Highway Traffic Safety Administration (NHTSA) provided an update on the ongoing efforts to recall the defective air bags, which were installed in at least 19 million vehicles in the United States.

Unfortunately, the announcement includes the ninth death which has been confirmed as being caused by Takata’s air bags. In July 2015, a 13-year-old boy was driving his relative’s 2001 Honda Accord Coupe when it crashed and the air bag inflator ruptured. Honda confirmed that an investigation concluded that the boy’s injuries were, in fact, caused by a defective air bag. The car was initially recalled in 2010, and a recall notice had been mailed to the current owner the day before the fatal crash. The vehicle involved in the incident had spent most of it service life in a high absolute humidity region, a factor that increases the risk of Takata’s air bags exploding.

NHTSA also announced that, as a result of recent ballistic testing, three manufacturers are expanding recalls to include additional vehicles. The revised recalls include: 2005-2008 Mazda Mazda6, 2002-2004 Honda CR-V, and 2005-2008 Subaru Legacy and Outback. The Takata recall is such a massive and important undertaking that NHTSA has selected John D. Buretta, a partner at the law firm Cravath, Swain & Moore, to oversee the effort.  NHTSA Administrator Mark Rosekind stated that Buretta and his team will play an important role in managing “Takata’s compliance with its obligations under NHTSA enforcement orders, and in implementing the Coordinated Remedy Program to accelerate and prioritize the largest, most complex consumer safety effort in U.S. history.”