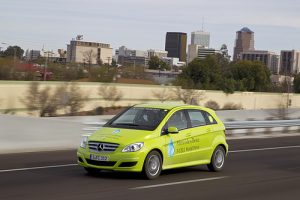 Federal regulators are proposing changes that would expand electrical safety requirements for hydrogen fuel cell vehicles and “mild hybrid” vehicles that use electrical systems to supplement gasoline engines and boost efficiency. NHTSA issued a notice of proposed rulemaking about the safety requirements, and U.S. Transportation Secretary Anthony Foxx said, “Today’s proposal not only boosts our efforts to increase fuel efficiency and energy security; it also builds on our efforts to encourage technology innovation.”

The proposed changes would bring the current standard FMVSS No. 305 in line with international regulations and the latest version of SAE J1766, the voluntary standard for “Recommended Practice for Electric and Hybrid Electric Vehicle Battery Systems Crash Integrity Testing.” The proposal would help eliminate some of the regulatory barriers that have prevented automakers from selling hydrogen fuel cell and mild hybrid vehicles in the U.S.

U.S. consumers would be able to purchase a wider variety of vehicles with high fuel efficiency and zero or low emissions without any decrease in safety. At the same time, the proposed rule would better align NHTSA regulations with global industry standards.

Specifically, the proposal includes adding an optional method for post-crash electrical safety, involving the use of physical barriers to prevent electric shock due to direct or indirect contact of high voltage sources. This would enable powertrain technologies. Additionally, while FMVSS 305 currently only has post-crash electrical safety requirements, the proposal would expand the standard to include electrical safety requirements during normal vehicle operation. It also includes an optional method of meeting electrical isolation requirements in certain conditions that would allow fuel cell vehicles to be offered for sale in the U.S. The comment period for the proposal, which is published in the Federal Register, is now open.