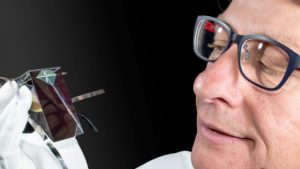 Engineers at Australia’s University of New South Wales (UNSW) have set a new world record for solar efficiency. Using normal sunlight without concentrators, they achieved 34.5 percent conversion efficiency. This is a significant leap—44 percent better than the previous record of 24 percent which was held by Alta Devices in the United States. This new accomplishment proves that photovoltaic cells still have room for improvement, and demonstrates that with further development, solar energy systems could be more efficient and therefore less expensive.

This encouraging result shows that there are still advances to come in photovoltaics research to make solar cells even more efficient. Extracting more energy from every beam of sunlight is critical to reducing the cost of electricity generated by solar cells as it lowers the investment needed, and delivering payback faster.

The record was set using a 28-square-centimeter mini-module that was embedded in a prism to squeeze the maximum possible amount of electricity from each beam of sunlight. A silicon cell is on one side of the prism, and a triple-junction solar cell is on the other side.  When sunlight passes through the triple-junction cell, energy is extracted by each layer (junction) at the most efficient wavelength, and the rest of the light pass through to the next layer until the maximum amount is absorbed. Some of the infrared sunlight doesn’t get used by the triple-junction cells, but it bounces onto the silicon cell so that none of the light is wasted.

The catch is that this type of cell is more expensive than standard silicon cells. The UNSW team is now focusing on improving manufacturing techniques in order to reduce the cost of multi-junction cells in order to make them a practical option.