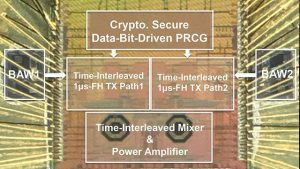 Researchers from the Massachusetts Institute of Technology (MIT) have designed a type of transmitter that could protect wireless data from hackers. This new transmitter uses a method called ‘frequency hopping’ to keep hackers at bay, and could be a massive step forward regarding data protection.

Frequency hopping is not in itself a new type of technology. This method sends each packet of data on a random and unique radio frequency channel. In theory, it prevents hackers from locating any particular piece of data. Unfortunately, when it comes to larger packets the hops are markedly slower, giving hackers enough time to successfully attack the data.

The new MIT transmitter hopes to change that. This device frequency hops all the individual 1 or 0 bits of data at every microsecond. The speed is so fast that hackers should have no chance of catching the data packets. The transmitter achieves this by using frequency-agile devices known as bulk acoustic wave resonators. The resonators quickly flip between a large array of radio frequency channels. Each time it flips, the device sends another data hop at random. To increase the security of their system, scientists added another feature: a wireless protocol to help aid the super-speedy frequency hopping.

Next, scientists worked out a method for randomizing how the data would be sent. To combat the increasingly quick and clever methods used by hackers, scientists used a system that generates a pair of unique channels across the spectrum every single microsecond. Thanks to the randomness of the channels being picked and the speed of the data, hackers have no choice but to pick bits at random. This makes hacking much slower going and dramatically reduces their chances of getting any important data.

As yet another layer of protection, scientists combined two transmitter paths into a time-interleaved architecture. The inactive transmitter is able to receive the next selected channel; meanwhile, the active transmitter sends data on the channel currently in use. Then they switch roles. By doing this the device can keep frequency hops fast and that much harder for hackers to target.