Over the past few years wearable technology has seen a number of advancements. From smart watches to toxic gas sensors, tech tattoos, and conductive hair – The push for the interconnectivity of all things, on all scales (macro and micro) subsequently drives the need for smaller, equally efficient power sources. Traditional power source materials are rigid, lacking in flexiblity, and present design challenges for small scale applications. However, a group of scientists from the Huazhong University of Science and Technology in Wuhan, China have developed a new flexible thermocell utilizing gel electrolytes to harvest energy from its surrounding environment.

The team, led by Dr. Jun Zhou, lead professor of Optoelectronics, created the wearable thermocell using an electrolyte gel layered in between two types of cells. The electrolyte solution is made from Poly vinyl alcohol (PVA) and fabricated using a laser light-scattering process. Each cell contains two metal plates consisting of different redox pairs: ferric/ferrous chloride (Fe2+/Fe3+) or potassium ferricyanide/ferrocyanide ([Fe(CN)6]3-/[Fe(CN)6]4-). This pairing, or coupling, allows the researchers to obtain the necessary thermogalvanic gel electrolytes with negative or positive thermoelectrochemical Seebeck coefficients. When the cells are paired and come in contact with each other, the difference in temperature of body heat and the surrounding environment produces a small current capable of powering and recharging low-energy, wearable devices. 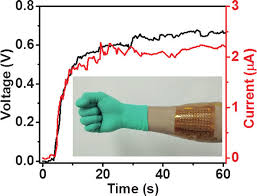 To demonstrate the technology, the team developed a proof-of-concept glove constructed by interconnecting the cells in an alternating checkboard-type pattern. As the glove is worn, the differences in temperature generate a current strong enough to power a device or charge a battery. The results show that the integrated wearable device can generate an open-circuit voltage of about 0.7 V and a short-circuit current of approximately 2 mA by utilizing body heat. The study was reported in a paper, Wearable Thermocells Based on Gel Electrolytes for the Utilization of Body Heat, recently published in the journal Angewandte Chemie International Edition.