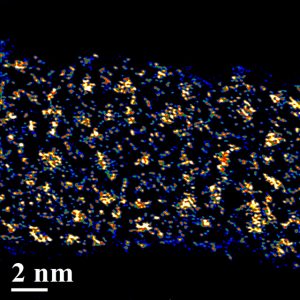 A new technique for making electrodes improves the capacity and lifespan of  hybrid batteries. Researchers at the Department of Energy’s Pacific Northwest National Laboratory used a new method to make a superior battery that combines lithium’s ability to hold a charge with a fast-charging supercapacitor. Batteries made with the new electrodes could store a third more energy and had twice the lifespan as conventional electrodes.

The researchers used a technique called ion soft-landing, which precisely controls the materials that are used to make the electrodes. They used this method to spray a chemical called polyoxometalate (POM) onto supercapacitor electrodes. POM typically has both positive and negative ions, but only the negative ions are needed for hybrid electrodes. Using ion soft-landing, the researchers separated the ions so that only the useful negative ions landed on the electrode’s surface, and the positive ions stayed out of the way. The team made centimeter-sized square hybrid batteries out of POM-carbon nanotube electrodes with an electrolyte gel membrane sandwiched between them to allow the ions to conduct.

“This is the first time anyone has been able to put together a functioning battery using ion soft-landing,” said researcher Julia Laskin. The hybrid battery was tested through 1,000 charge and discharge cycles, and the results were clear: the new technique made a better battery. Compared to conventional supercapacitor electrodes, the electrodes made with soft-landing could hold 27 percent more energy, lasted through more cycles, and required much less POM material to reach the highest possible capacity. Laskin said:

The fact that the capacitance reaches a maximum with so little POM, and then drops off with more, is remarkable. We didn’t expect such a small amount of POM to be making such a large contribution to the capacitance.

The team examined the electrodes under powerful microscopes and confirmed their theory: the positive ions in off-the-shelf POM were crowding the nanotubes and reducing the battery’s overall performance. The study’s lead author Venkateshkumar Prabhakaran said, “It will help us unravel important scientific questions about this energy storage technology, a hybrid between common lithium rechargeable batteries and supercapacitors that have very high energy density.