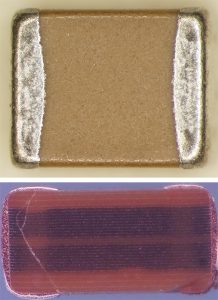 Researchers at the National Institute of Standards and Technology (NIST) have developed a way to find hidden flaws in ceramic capacitors before they cause electronic failure. The new technique could help prevent failures in life-saving medical devices, as well as satellites and other spacecraft.

Cracks in capacitors are often hard to find, and if they aren’t detected they can start conducting electricity, which can deplete batteries and cause electrical failure. A NASA study found that of all electronic components, capacitors are the most likely to fail. Today’s screening methods, such as X-rays and acoustic microscopy, don’t always find subsurface cracks, especially near corners under capacitor endcaps, an area especially prone to mechanical stress. The new method is so good at finding these elusive cracks that it could also be used to detect structural flaws in other types of materials. A NIST announcement describes how it works:

Researchers briefly apply an electric field across the electrodes of a capacitor, exciting a vibration at a specific frequency. They then measure the decay over time (called ringdown) of the signal. These data are analyzed to determine slight shifts in frequency versus the magnitude of the vibration. These shifts are greater when cracks are present. This nonlinear approach—focusing on frequency shifts relative to signal strength rather than the frequency shifts alone—is especially useful because it is not affected by slight variations in size of the capacitors.

By tracking the patterns in these vibrations, the researchers were able to identify 90 percent of the tiny cracks in capacitors during a test. The new method was developed by NIST researchers, in collaboration with capacitor manufacturers. The tests were conducted at the University of Maryland, NASA Goddard Space Flight Center, and Colorado State University. The work is described in a paper in AIP Conference Poceedings.