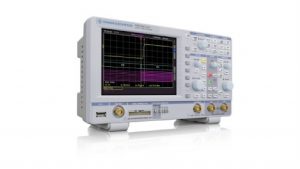 Rohde & Schwarz introduces the R&S HMO1202 mixed signal oscilloscopes, a new family of entry-level instruments that deliver outstanding performance. A bandwidth of up to 300 MHz coupled with comprehensive math and FFT analysis functions make them eminently suitable for professional analysis of digital signals. Two analog and eight digital channels, a sampling rate up to 2 Gsample/s, a memory depth up to 2 Msample, and a true vertical sensitivity of 1 mV/div are exceptional for instruments in the under EUR 2,000 price segment.

Rohde & Schwarz has added the new R&S HMO1202 mixed signal oscilloscopes to its R&S HMO1002 oscilloscope family that was introduced just last year. The instruments are ideal for use in the development of embedded designs and are tailored to the needs of users in research, education and service. The mixed signal oscilloscopes are able to analyze serial SPI buses on digital channels while simultaneously monitoring two analog signals referenced to the transmitted SPI data. All that is needed is the separately available R&S HO3508 logic probe fromRohde & Schwarz, which is compatible with all R&S HMO oscilloscopes.

Rohde & Schwarz has packed numerous math functions into the new R&S HMO1202 oscilloscopes, from simple standard operations such as add, subtract and divide to logarithmical differentiation and integration of waveforms. A formula editor is also available for entering a variety of calculation functions, such as integrating waveforms to determine the charge on a capacitor.

The built-in FFT analysis functions with their 128 kpoints are equivalent to those found on larger oscilloscopes. Time domain signal, measurement window, result and analysis range are displayed in a single window, greatly facilitating spectral measurements. FFT analysis can even be performed on recorded signals, making it possible to analyze segments of interest by varying the window width.

The integrated pattern generator generates protocol messages at up to 50 Mbit/s. Developers can supplement the predefined messages by programming their own signal patterns of up to 2 kbit in length. This enables them to emulate circuit components that are not yet available, such as sensors. Overall, with numerous other functions for mask-based pass/fail tests as well as the high waveform update rate of 10 000 waveforms/s, the R&S HMO1202 oscilloscopes are ideal for developing electronic circuits.

The supported media transfer protocol makes it exceptionally easy to exchange test data and screenshots between the instrument and a PC. Software licenses and firmware updates are installed by simply dragging the files from the PC and dropping them into the R&S HMO1202 file structure. The instrument is updated when it is restarted. Alternatively, the integrated web server can be used to save and load instrument and trigger settings and also to capture and download screenshots.

Ready for the future with upgrade vouchers