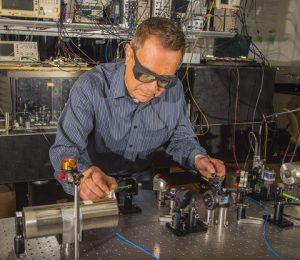 Scientists at the National Institute of Standards and Technology (NIST) are working on a new form of quantum radio. Researchers believe that quantum physics could potentially allow them to communicate in places where traditional cellphones and radios are unable to function. These device could also be used to enable GPS in underwater, underground, and in urban canyons — places that normally struggle to achieve a working signal.

This type of technology could have numerous applications. GPS signals are generally unable to penetrate water, building walls, or soil. This limits their uses, particularly for soldiers, mariners, and surveyors. However, this new device could solve all those problems, allowing people to work safely even in inhospitable conditions.

VLF technology has already proved useful for underwater submarine communications. Unfortunately, it lacks the data-carrying capacity for audio or video. One-way texts are the only real option. Additionally, submarines are forced to carry antenna cables along with them if they hope to communicate this way. Furthermore, they have to rise to periscope depth — about 60 feet beneath the surface — for this mode of communication to work effectively.

“The big issues with very low-frequency communications, including magnetic radio, is poor receiver sensitivity and extremely limited bandwidth of existing transmitters and receivers. This means the data rate is zilch. The best magnetic field sensitivity is obtained using quantum sensors. The increased sensitivity leads in principle to longer communications range. The quantum approach also offers the possibility to get high bandwidth communications like a cellphone has. We need bandwidth to communicate with audio underwater and in other forbidding environments.”

To achieve this goal, researchers have demonstrated detection of digitally modulated magnetic signals. This system alters magnetic fields so as to control the frequency of the signals. The sensors were able to detect significantly weaker signals, as well as suppress any ambient noise that could interfere with the transmission. Location tracking is proving a greater challenge to the team, as it requires additional bandwidth and improved digital algorithms.

To deal with these issues, researchers are actually inventing an entirely new field of study. It will combine quantum physics with low-frequency magnetic radio. Further research will determine the strengths and weaknesses of these devices, and when they will be able to undergo real world testing.