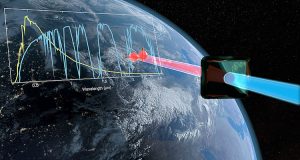 An international team of researchers and engineers in conjunction with Leibniz University Hannover has created a new way to generate photons that could enhance encryption in satellite-based communications. These quantum-entangled photons can now be generated in a spectral range of light that has been inaccessible — at least until now. Experts believe this research could prove effective in advanced encryption that would be almost impenetrable.

The new method for creating the quantum-entangled photons also allows researchers to detect them at a wavelength of 2.1 micrometers. Before this, entangled photons have been regularly used for certain methods of encryption; however, they could only be used with entangled photons within the near-infrared range of 700 to 1550 nanometers.

This traditional method had several drawbacks. The shorter wavelengths can be negatively impacted by background radiation from the sun, as well as light-absorbing gases in the atmosphere. While this technology works well at night, during the day this end-to-end encryption cannot be guaranteed – especially if the weather proves too sunny or cloudy for the equipment.

The new method hopes to eliminate these issues. Due to their size, the photon pairs would suffer considerably less of an impact from solar background radiation. The size of the photons has another considerable advantage, allowing fewer to be absorbed by atmospheric gases and resulting in a more secure communication method.

In their research into this new method, the team of engineers relied on a nonlinear crystal constructed from lithium niobate. A laser sent ultrashort light pulses directly into the crystal; the resulting nonlinear interaction created an entangled pair of photons with a wavelength measure 2.1 micrometers.

The results of the study were recently published in the journal “Science Advances,” but the work of this team is far from over. Next, they intend to miniaturize the entire system. They hope to accomplish this by converting it into photonic integrated devices. This would allow for mass production, permitting the engineers to use the entangled photon pairs in a wide range of different applications. The resulting technology could help to amp up security when transmitting data, allowing for strong encryption regardless of the time of day or weather.