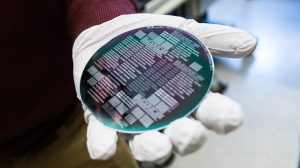 EPFL researchers have discovered a powerful new compound with a vast array of potential applications. Vanadium dioxide contains some singular properties that make it the perfect choice when it comes to charging low-power electronic devices. Working under the Phase Change Switch project in conjunction with the EU’s Horizon 2020 research program, this discovery could potentially revolutionize artificial intelligence, neuromorphic computing, and so much more.

Vanadium dioxide has already shown that it can outperform silicon. Scientists are now working to prove that this unique compound can be used in the creation of programmable radio frequency electronic functions. These would include aerospace communication systems.

One of the key characteristics of vanadium dioxide is its behavior. The compound operated as an insulator at room temperature; if it warms past 68 degrees Celsius, the compound operates as a conductor. This behavior is known as metal-insulator transition. It is currently being studied by scientists for potential applications.

Vanadium dioxide’s electronic properties are no secret in the scientific community. Experts have long known about the potential behind this compound. The problem was that no one was capable of explaining or understanding these properties until now. The atomic structure of vanadium dioxide changes as the temperature increases. As this occurs it transitions from a crystalline structure at room temperature to a metallic one as the heat increases. This transition can occur in the space of a nanosecond.

“VO2 is also sensitive to other factors that could cause it to change phases, such as by injecting electrical power, optically, or by applying a THz radiation pulse.”

Unfortunately, finding out the how and why of vanadium dioxide was just one step in this scientific journey. Researchers had to contend with the fact that its transition temperature is simply too low for most modern electronic devices. For a modern electronic device to fully function, it needs to be at 100 degrees Celsius. However, scientists may have discovered a solution to this particular problem. According to their research, adding germanium to a vanadium dioxide film raises the material’s phase change temperature to above 100 degrees Celsius.

All of this adds up to a bright future for ultra-low-power electronic devices, with even more potential applications in the future Scientists believe this discovery could also prove useful in the advancement of neuromorphic computing, as well as high-frequency radar for self-driving cars.