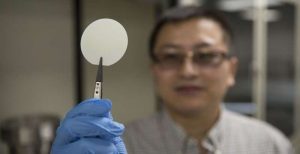 Scientists at Arizona State University (ASU) are developing a new material that could change the field of space exploration. Called gallium nitride (GaN), this material could be the next major semiconductor for power electronics. Researchers are working on creating the first-ever gallium nitride processor, in the hopes that it will be used in future space missions.

Gallium nitride is best known as a semiconductor compound used in light-emitting diodes. It is capable of conducting electrons at 1,000 times the efficiency of silicon. Gallium nitride surpasses silicon in other ways as well: power handling, temperature, and even speed are all greatly improved with gallium nitride. With that in mind, it’s easy to see why this material is poised to replace silicon-based devices in the future.

Scientists believe that gallium nitride can be used to develop a high-temperature microprocessor, perfect for space applications. The project has received a three-year grant from NASA’s Hot Operating Temperature Technology program, to the tune of $750,000.

“This material can enable electronics system with greater efficiency, much reduced size and weight, and higher operation temperature, all of which are highly desirable for various space applications.”

Gallium nitride has multiple advances over silicon. It is thermally robust and chemically stable, and has no problem handling extreme temperatures. Silicon, on the other hand, tends to malfunction at temperatures about 300 degrees Celsius, and operates at a low frequency.

Scientists are also working on gallium nitride high electron mobility transistor technology. This allows monolithic integration of an assortment of gallium nitride-based devices, and has incredibly fast frequency response times thanks to the use of two-dimensional electron gas.

While these are all very exciting developments, the process behind them will take considerable time. Developing the first gallium nitride-based microprocessor is almost certainly going to require an enormous amount of trial and error before scientists produce a working model.

Because of the factors of time and difficulty, it’s hard to say exactly when NASA will be able to integrate this technology. The scientists behind the project believe that a timeframe of about ten years is realistic. At that point, we may well see the first space exploration journey outfitted with a gallium nitride-based microprocessor.