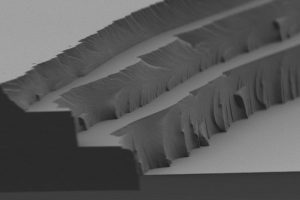 Solar thermal fuel polymer film comprising three distinct layers (4 to 5 microns in thickness for each). Cross-linking after each layer enables building up films of tunable thickness.

Although great progress has been made in harvesting solar technology, storing the sun’s energy remains challenging. A new approach to storing solar power focuses on chemistry, rather than electricity. Researchers at MIT have developed a new material that can soak up solar energy during the day and save it for later, when it can be released as on-demand heat. The material takes the form of a transparent film, so it could be used for many different applications, such as a built-in defroster for car windows. 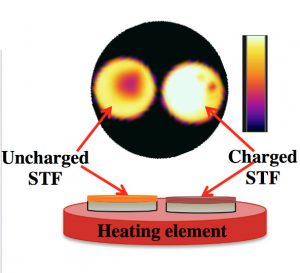 The platform for testing macroscopic heat release. A heating element is used to provide sufficient energy to trigger the solar thermal fuel materials, while an infrared camera monitors the temperature. The charged film (right) releases heat enabling a higher temperature relative to the uncharge film (left).

The new solar energy storage film is made from azobenzenes, materials that change their molecular configuration in response to light. The researchers modified the material’s chemistry to improve its energy density and make it better at releasing energy on demand. The resulting material is made of molecules that become charged when exposed to sunlight. They remain in that state until a specific trigger causes them give off a burst of heat while they snap back to their original shape. In the case of a windshield, the researchers imagine a puff of hot air could trigger the heat-producing action.

Similar chemically-based storage materials, known as solar thermal fuels, have already been developed by the same team and other researchers. But while previous designs only worked in liquid solutions, the new approach stands out because it is the first based on a solid-state material, and the first to use inexpensive materials and widespread manufacturing technology.

Spin-coating process that enables deposition of the solar thermal fuel polymer material from solution. The film can then be readily charged with ultraviolet light. This approach can be extended to a variable thickness layer-by-layer process.

Next, the researchers are working on making the material more transparent and enabling it to reach even higher temperatures. Their work is described in a paper published in in the journal Advanced Energy Materials.