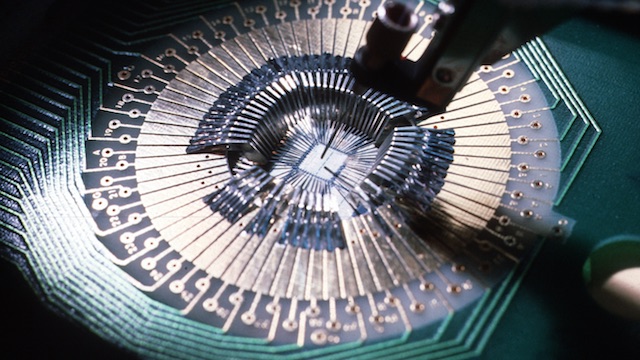 A group of scientists from the United States, Singapore, and China have discovered a candidate material with potential to extend the limits of Moore’s Law. The research team, which worked primarily in Berkeley Lab’s Molecular Foundry in association with the Department of Energy, has found a new way to add more computing power to microchips.

Moore’s Law is a constant companion to those working in microchip manufacturing. Simply put, Moore’s Law states that the number of transistors per square inch on integrated circuits will double every year. This has proven true since its inception back in 1965, and has raised increasing concerns about microchips as scientists draw ever-closer to the limits of their capabilities. Conventional materials have made it increasingly difficult to pack in the necessary amount of transistors. Some have even expressed concern that Moore’s Law would break down in the near future. This could prove catastrophic for further attempts to create smaller and more powerful circuits.

That’s where valleytronics comes in. This emerging approach uses candidate crystalline materials with highly selective responses that react under specific illumination conditions. To put it another way, scientists use the band structure of a material to separate the information (encoded as 0s and 1s) and store it in separate energy valleys of electrons. These electron valleys are dependent on the material’s specific crystal structures.

With valleytronics, researchers were able to prove that tin-sulfide is capable of absorbing different polarizations of light. The material can then selectively reemit light of different colors at a variety of different polarizations. This allows scientists to access electronic and valleytronic degrees of freedom simultaneously. Ultimately, the material could significantly increase the data storage density and computing power of circuits.

“We show a new material with distinctive energy valleys that can be directly identified and separately controlled. This is important because it provides us a platform to understand how valley signatures are carried by electrons and how information can be easily stored and processed between the valleys, which are of both scientific and engineering significance.”

These findings will help scientists to develop fully operational valleytronic devices. These devices could potentially be integrated into electronic circuits in the future. Additionally, the concept of joining light with valleys in this material could lead to the development of future hybrid electronic/photonic chips.