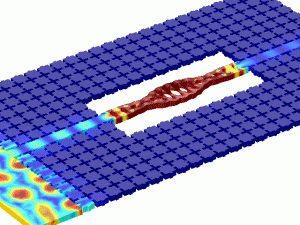 As Moore’s Law approaches its limits, engineers are experimenting with unconventional ways to carry data from one point to another. Light, sound, and radio waves are all potential information carriers, but they each have limitations. Researchers at the National Institute of Standards and Technology (NIST) have now developed a device that could help computers use a combination of techniques to move and store information.

The team described their device, called a “piezo-optomechanical circuit” in Nature Photonics and presented their research at the March 2016 meeting of the American Physical Society in Baltimore. They wrote:

Working in GaAs facilitates manipulation of the localized mechanical mode either with a radiofrequency field through the piezo-electric effect, which produces acoustic waves that are routed and coupled to the optomechanical cavity by phononic-crystal waveguides, or optically through the strong photoelastic effect. Together with mechanical state preparation and sensitive readout, we use this to demonstrate an acoustic wave interference effect, similar to atomic coherent population trapping, in which radiofrequency-driven coherent mechanical motion is cancelled by optically driven motion. Manipulating cavity optomechanical systems with equal facility through both photonic and phononic channels enables new architectures for signal transduction between the optical, electrical and mechanical domains.