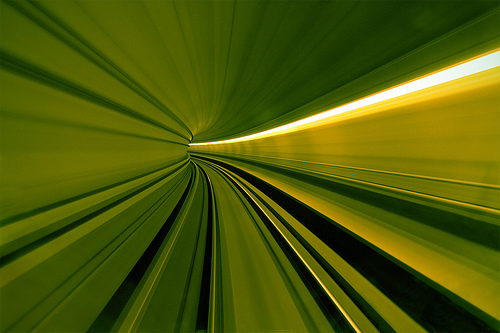 In theory, the terahertz band of the electromagnetic spectrum could be used to improve technology for communications, medical, military, and consumer electronics applications. These waves can pass through non-conducting materials but they are also a non-ionizing form of radiation that is considered safe for the human body. Their unique properties could be used to identify tumors, detect explosives, wirelessly transmit data, or to create cameras that can see through objects. They are so fascinating that some researchers have devoted entire careers to studying these waves. However, they still remain mysterious, because they are difficult to manipulate and generate. A new study published in the Journal of Applied Physics, however, describes a new device that can convert a DC electric field into a tunable source of terahertz radiation.

An international team of researchers developed a technique using hybrid semiconductors that combine a thick conducting material with layers of 2D materials such as graphene, silicene, or a 2D electron gas. When an electric current passes through a 2D layer, it creates instabilities called surface plasmon resonance that induce terahertz radiation. By adjusting various components of the device, such as changing the density of electrons or adjusting the strength of the DC electric field, the researchers can tune the wavenumber and therefore control the frequency of the terahertz radiation.

According to the researchers, this new design improves previous sources of terahertz radiation, with improved imaging capabilities due to the device producing a much shorter wavelength and a wide frequency tuning range.