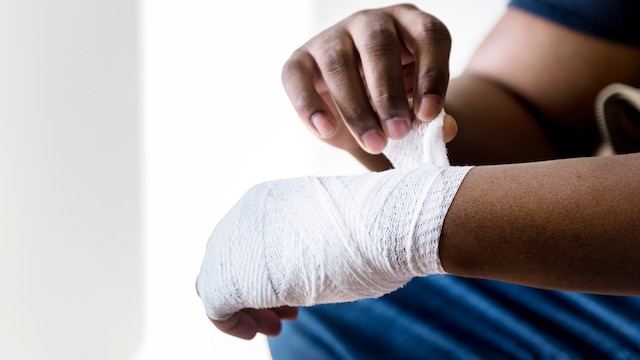 Engineers from the University of Wisconsin-Madison have created a new type of wound dressing capable of speeding up he healing process. The bandage takes energy from the user’s own physical motions and converts it into energy which is applied to the site of the injury in gentle electrical pulses. Scientists believe this could prove a serious game-changer in the medical community.

Scientists have long been aware of the healing properties of electricity, but figuring out the perfect way to harness it has proven a real challenge. Traditional electrotherapy units are bulky and expensive, capable of only delivering massive jolts of electricity as opposed to the gentle pulses often needed to encourage healing.

Early testing of the wound dressing has been overwhelmingly positive. During rodent tests, it was determined that the bandages helped reduce healing time down from two weeks to a mere three days.

In the device, small electrodes are linked to a band that holds energy-harvesting units. These units are called nanogenerators, and are worn around the users torso in a loop. As the patient breathes, their ribs will expand and contract. This movement is what powers the nanogenerators, allowing them to deliver low-intensity electric pulses to the site of the wound.

There are numerous health benefits to these type of electrical pulses. The low-power nature of the pulses prevents them from harming healthy tissue, which is often a concern with standard high-powered electrotherapy devices.

Additionally, research indicates this treatment could have a significantly lower risk level than high-energy electrical pulses. Cells exposed to traditional electrotherapy end up producing nearly five times more reactive oxygen species than cells that encountered the nanogenerators. These reactive oxygen species are a major risk factor for cellular aging, and even cancer.

Next, scientists will work to determine exactly how these low-power pulses benefit the healing process. They’ll be working on pig skin with the device as well, as it is a close approximation of human tissue samples.

Additionally, the team wants to give their nanogenerators some more capabilities. They hope to tweak the structure of their design so that the nanogenerators can one day draw energy from the slightest movements of the skin or even a patient’s own pulse.