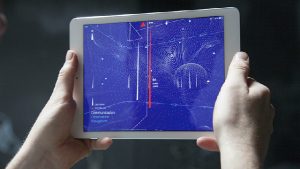 A Dutch artist created a new app called Architecture of Radio that depicts a 360-degree view of the invisible radio signals in a given location. A site-specific version of the Architecture of Radio is currently on display at an art show in Germany, but you can also download an app from iTunes to try it out at home. (The iOS version is on sale now for $3 and the Android version should be available in January.)

The app’s creator Richard Vijgen has been described as an information designer. On his website, he writes, “I design and produce interactive data visualisations and data installations ranging from microscopic to architectural in scale. I use code, pixels and 3D printers to describe the world.” In this case, he uses open source data about millions of cell towers, WiFi routers, and satellites in the real world He uses the datasets to create a visual representation of invisible radio signals. Although it’s based on facts, the app is not a measurement tool (it won’t help you optimize the WiFi in your apartment). It is simply meant to inspire.