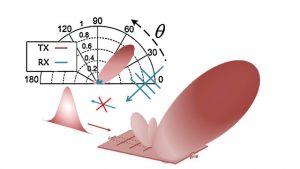 A new antenna designed by researchers at the University of Texas at Austin is able to block out unwanted returning signals so that outgoing signals are faster and clearer. While conventional antennas have an inherent symmetry that makes them transmit and receive signals with the same efficiency, the new antenna blocks out the noise and echoes that bounce back toward it. Researcher Andrea Alù explains:

Our achievement is that we break the symmetry between transmission and reception signals, so we are able to prevent the antenna from having to listen to reflections and echoes that affect the source. We show that it is possible to efficiently overcome these constraints using temporally modulated traveling-wave antennas.

The researchers simultaneously fed the antenna two signals. Along with the main radio frequency signal, they also transmitted a weak low-frequency modulation signal, which broke up with antenna’s symmetry without requiring any additional electrical equipment. This technique could be used instead of magnet-based isolators, which are typically used to block an antenna from receiving incoming signals. By minimizing noise without needing isolators, the new design could lead to telecommunication systems that are smaller, faster, clearer, and cheaper than today’s technology. The antenna is described in the Proceedings of the National Academy of Sciences. The researchers wrote:

In this paper, we show that it is possible to efficiently overcome [reciprocity] using temporally modulated traveling-wave circuits. Beyond the basic physics interest of our theoretical and experimental findings, we also prove that the proposed temporally modulated antenna can be efficiently used to transmit without being forced to listen to echoes and reflections, with important implications for radio-wave communications. Similar concepts may be extended to infrared frequencies, with relevant implications for energy harvesting.