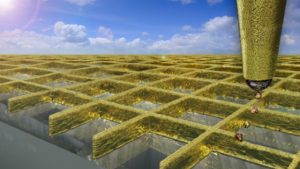 Researchers at Swiss University ETH Zurich have developed transparent electrodes that could be used to improve touch screens, solar cells, and displays. Transparent electrodes are already very common—they are in the invisible, conductive coating that allows devices to recognize a finger touching the surface. Compared to today’s electrodes, though, the Swiss research team says the new material is more conductive, which will make touch screens faster and more precise. Furthermore, a novel structure makes the new electrodes more transparent, so they will provide better screen quality.

Today’s touch screens are coated with thin layers of indium tin oxide, a material that is very transparent and conductive enough to get the job done. However, gold and silver are significantly more conductive, so they would make touch screens more responsive. However, they are far from transparent. ETH professor Poulikakos explained, “If you want to achieve both high conductivity and transparency in wires made from these metals, you have a conflict of objectives.”

To solve this dilemma, the researchers used metal walls that are more than twice as tall as they are wide. At this size and shape, the walls are highly conductive, but since they are only 300 hundred nanometers wide (a few hundred times thinner than human hair), they are almost invisible when viewed from above. The researchers produced these metal walls using a 3D printing process that they developed called Nanodrip. It involves using an electrical field to precisely draw extremely small droplets of metallic ink out of a glass tube.

The researchers described their process in a paper published in the journal Advanced Functional Materials. Next, they will work on scaling their printing method for industrial use. Once it is scaled up, the new transparent electrodes could be an inexpensive option for creating touch screens that look and perform better than the ones we use today. The new electrodes could also be used to improve solar cells, since they are more conductive than the ones that are commonly used to harvest solar energy. Lastly, the researchers also suggest that because the material is more transparent, it will improve the appearance of curved OLED displays, like the one LG has been showing off at the Consumer Electronics Show this week.