In many ways, graphene seems to be the cure-all solution for anything electronic, and it’s easy to see why. This 2D material, made from carbon just one atom thick, is not only incredibly thin and lightweight, but it is also strong and fast. However, it can also be difficult to produce and manipulate, and ultimately, graphene is not a semiconductor, which makes it an imperfect building block for digital technology. A physicist at the University of Kentucky collaborated with scientists from Germany and Greece to search for a 2D material that could possibly be even better than graphene. Using computer simulations, they built a combination of elements that have all the properties they were hoping to find. Even if the material doesn’t turn out to be quite as perfect in real life as it appears to be in simulations, the researchers have demonstrated an interesting new way for scientists to test their theories using software. 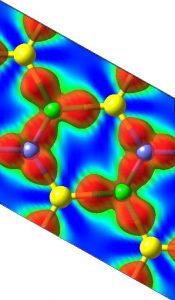 “This discovery opens a new chapter in material science by offering new opportunities for researchers to explore functional flexibility and new properties for new applications,” said Madhu Menon, the physicist who worked on the project. “We can expect some surprises.”

The research team searched for a material that met several criteria—it had to be light, earth abundant, inexpensive, and a semiconductor. The answer was a combination of silicon, boron and nitrogen. When these three elements are combined in a hexagonal pattern similar to graphene’s structure, they make a substance that is extremely stable—a property that many other graphene alternatives lack. “We used simulations to see if the bonds would break or disintegrate — it didn’t happen,” said Menon. “We heated the material up to 1,000-degree Celsius and it still didn’t break.”

Menon says that because the new 2D material is partially made of silicon, it will be easier to integrate with existing technology. The new material is metallic, but it can be made semiconducting by adding other elements, which will easily attach to the silicon atoms.

Source: University of Kentucky | Physical Review B | Images courtesy of the researchers