Neutralization of Static Charges by Air Ions – Part I: Theory

When the conductivity of the material cannot be made acceptable, air ions can be used to neutralize static charges.

In “How Fast Does a Charge Decay?” the neutralization of charges by conduction through the bulk or along the surface of a material was discussed.1 Although bulk and surface conduction are important processes in static neutralization, in many situations, the matferials involved cannot be made sufficiently conductive in an acceptable way. In these cases, the only solution is neutralization by air ions. The physical properties of air ions were discussed in “Ions.”2 However, their use in charge neutralization was touched on only briefly.

Air ions or atmospheric ions differ from electrolytic ions in several ways. Air ions are small molecular clusters consisting mostly of water molecules grouped around a nitrogen or oxygen molecule that has lost or gained an electron. In the case of positive ions, the number of water molecules may range from 10 to 15, and in the case of negative ions, from 8 to 12 (see Figure 1). In the latter case, the (negatively) charged molecule is always oxygen.

Air ions have only a limited lifetime. In undisturbed air, that lifetime is in the order of minutes. They disappear in a number of ways. Positive and negative ions can recombine, air ions can combine with airborne particles, and air ions can plate out on surfaces, either by diffusion or with the aid of an electric field. It is the latter process that is utilized in charge neutralization.

An atmosphere with concentrations n+ and n– of positive and negative ions, respectively, may be characterized by polar conductivities λ+ and λ–, which are given by

where e is the (numerically) common charge of the ions.

Often, it is more convenient to use the corresponding polar resistivities

Charge Neutralization
Figure 2 shows a positively charged conductor A surrounded by an atmosphere containing positive and negative ions. The field created by A moves the surrounding ions. Positive ions are repelled from the body and move away. Negative ions are attracted, and eventually, they plate out on the charged body. The field from the plated-out ions is superimposed on the original field from the positive charge, thus making it appear as if the charge on A has been reduced. 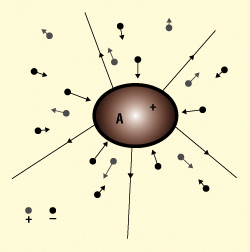 Let us consider a section of the surface of A, where the charge density is σ+(C ∙ m–2). The charge will create a field perpendicular to the surface with the strength

According to Ohm’s law, this field causes a current directed toward A, with the current density j–(A ∙ m–2) given by

where is the initial charge density and

is the time constant for positive charges.

If the charge density is integrated over the whole surface of A, the total charge would be

where is the initial total positive charge. Similarly, for a negative charge, we get

Equations 11 and 12 state that a charge on a conductor decreases exponentially according to the time constant εoρ, where r is the relevant (opposite) resistivity of the air.

Flux Distribution
Equations 11 and 12 are valid only if the field from the charge extends exclusively through air with a given resistivity. However, in many (probably most) practical cases, the electric flux from the charge is spread over several regions of different permittivities and resistivities.

Figure 3 shows a relatively simple example of this situation. A metal disk with an area A is placed on a slab of insulative material (a dielectric) with a thickness d and permittivity ε, and resting on a grounded plane. The disk has a positive charge q, which creates a field Ed in the dielectric and a field Ea in the ambient air. If we assume the dielectric to be perfectly insulative, only the field Ea will contribute to the neutralization of q. The relationship between Ed, Ea, and q can be estimated by considering the capacitance of the disk with respect to ground, Cd, and with respect to the surrounding air, Ca. 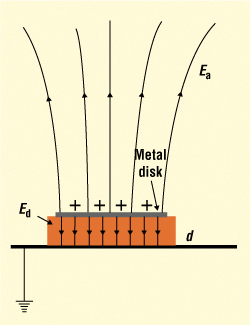 If we assume that the thickness d of the dielectric is much smaller than the linear dimensions of the metal disk, the capacitance Cd can be written as

Capacitance Ca depends on the shape of the disk and the distance (above the disk) to grounded surroundings. An appropriate approximation of Ca seems to be that of a semispherical capacitor (see Figure 4) with a capacitance

where r is the equivalent radius of the disk,

and R is the average distance to grounded surroundings. 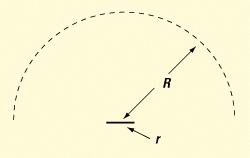 As we can usually assume that r << R, Equation 15 can be written as

The total capacitance of the disk is

The charge q will be distributed on the disk, with

on the topside, and

The field in the surrounding air from the charge qa causes the neutralizing current I– to flow to the disk. Using Equations 6, 7, and 8, we find

However, I– is also the total charge’s decay (or neutralization) rate, that is,

Equation 21 has the solution

where the time constant τ+ is given by

Using A = πr2 and ε = εrεo, where er is the relative permittivity of the insulative slab, Equation 24 can be written as

Using Equations 5 and 10, Equation 25 may also be written as

For a given ion environment, Equations 25, 26, and 27 give the rate of neutralization by air ions of a positive charge as a function of the geometrical and dielectric location of the charge. Similar symmetric equations hold true for the neutralization of negative charges.

Equations 25, 26, and 27 were developed for a charge located on a conductor, that is, in a situation in which the concept of capacitance can be applied. However, with some approximations, the same formulas are also valid in the case of charged insulators.

Figure 5 shows the distribution of the electric flux from a charged insulator disk. It is the same situation as the one shown in Figure 3, except that in Figure 5, the metal disk has been removed and the charge is uniformly distributed on an area A of the insulator surface. 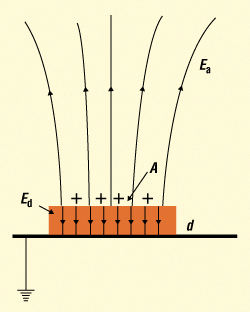 The fields Ea and Ed are therefore the same in the two situations; consequently, the neutralization processes are identical. Therefore, Equations 25, 26, and 27 still express the rate of charge neutralization.

Here, some readers may ask, “When everything seems to be the same for the conductor and the insulator, why not use the same concepts, especially the concept of capacitance, in the two cases?” The short version of the answer is the following. If a conductor with a capacitance C and a charge q is grounded, an energy

would be released in a discharge (most likely a spark). In the situation of Figure 3, the energy WC would amount to

and this energy can be released by approaching the surface of the metal disk with a grounded wire. In the situation of Figure 5, exactly the same energy is stored in the field, as the flux distribution is the same in the two cases. However, touching the surface of the charged insulator with a grounded wire may provoke a brush discharge, releasing a fraction of the total energy stored in the field. As capacitance is intimately related not only to the energy stored in the field but also to the energy that may be dissipated in a discharge from the charged item, capacitance has no place in the description of charged insulators.

It has been shown that it is possible theoretically to relate the neutralization rate of a charged item with given dimensions and dielectric properties to quantities that are, at least in principle, measurable. In Part II of this article, the theory will be applied in practice.