Neural Implant is Delivered to the Brain Through Blood Vessels 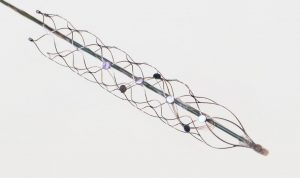 Some of the best innovations come from using old technology in a completely new way. An Australian research team has done just that, by using a routine medical procedure to deliver a novel device to the brain through blood vessels. The gadget, called a “stentrode,” is about the size of a paperclip and includes an electrode array for recording brain signals. Researchers have demonstrated that it could be used to safely expand the use of brain-machine interfaces to treat physical disabilities and neurological disorders. It was developed under DARPA’s Reliable Neural-Interface Technology (RE-NET) program, which aims to revolutionize prosthetic limbs by connecting them to the brain.

Previously, patients had to endure open brain surgery in order to connect their brains to machines. Surgeons would have to perform a craniotomy to open the skull and implant electrode arrays into particular regions of the brain. Now, the Australian team is delivering implants to the brain with a simple stent, a minimally invasive procedure involving a simple catheter being inserted into a blood vessel. Traditionally, a stent is used to treat damaged arteries, but in this case it becomes a door to the brain. After placing the small stentrode into a blood vessel in the neck, the researchers use real-time imaging to guide it to a precise location in the brain. Then the stentrode expands and attaches to the walls of the blood vessel, where it can read the activity of nearby neurons. Doug Weber, the program manager for RE-NET said:

DARPA has previously demonstrated direct brain control of a prosthetic limb by paralyzed patients fitted with penetrating electrode arrays implanted in the motor cortex during traditional open-brain surgery. By reducing the need for invasive surgery, the stentrode may pave the way for more practical implementations of those kinds of life-changing applications of brain-machine interfaces.

The research team used this new technique to implant the device in sheep and record their brain activity for up to six months. They found that the stentrode was safe and worked just as well as electrodes that had been implanted with open brain surgery. Looking ahead, the researchers are planning the first in-human trial of the stentrode in 2017 at the Royal Melbourne Hospital in Melbourne, Australia.