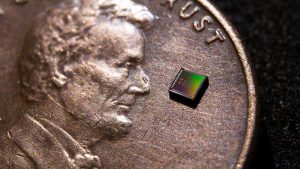 Researchers at the University of California, San Diego have created a “near-zero-power” temperature sensor. This remarkable new sensor has the potential to extend the battery life of wearable devices, smart home monitoring systems, and a variety of devices from the Internet of Things.

The near-zero-temperature sensor runs on a mere 113 picowatts of power. To put that into perspective, it’s 10 billion times smaller than a watt. The technology used in this design opens up the possibility for more devices powered by low-energy sources, such as the human body itself.

“Our vision is to make wearable devices that are so unobtrusive, so invisible that users are virtually unaware that they’re wearing their wearables, making them ‘unawearables.’ Our new near-zero-power technology could one day eliminate the need to ever change or recharge a battery.”

“We’re building systems that have such low power requirements that they could potentially run for years on just a tiny battery.”

Hui Wang, electrical engineering Ph.D. student and the first author of the study

All this technology is integrated into an amazingly small chip. The chip measures about 0.15 X 0.15 square millimeters, and can operate at temperatures anywhere from negative 20 C up to 40 C. Although the device can keep up with state-of-the-art technology in most aspects, it is slightly slower than other temperature sensors. It averages about one temperature update per second.

The scientists hope to improve upon the speed of their device, as well as its accuracy. Once those issues are taken care of, the next step will be integrating the design into commercial devices. All of this adds up to smaller, faster, more effective wearables as well as other similar devices.